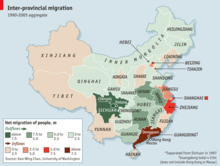 Geography Professor Kam Wing Chan's work on internal Chinese migration is prominently cited in this week's Economist article, "The Impact of Chinese Migrati0n: We Like to Move It Move It".

IF YOU purchased one of the 1.8 billion mobile phones shipped around the world last year, there is a 50% chance it was put together in the Chinese province of Guangdong. There is also a good chance it was not assembled by a native Guangdonger, but by one of the millions of migrants who have left their homes and travelled to the coast to find work. Grinding poverty has long been a cause of migration and was the impetus again after the death of Mao Zedong in 1976. The story of migration since then is the story of modern China, as migrant workers have transformed China’s economy. Kam Wing Chan of the University of Washington has compiled statistics which show that from 1990 to 2005—the most recent period for which reliable statistics are available—there was an overall gross migration across provinces of about 80m migrants (see map). An increasing number also migrate within their own province. All told, some 230m Chinese spend most of the year away from their home town or village. This is almost a third of all people globally estimated by the UN to be migrating within the borders of their own country. Most migrants move in search of work. The number of rural Chinese working away from home is now almost 160m, or 12% of the country’s population. The Chinese government’s population-planning commission forecasts another 100m rural residents could move to cities by 2020. As migration patterns change, though (see article), expect to see rapid social and economic change across inland China

The article also features an animated "videographic" illustrating migration flows. In addition to Chan's migration work, his work on the effects of this migration on Chinese economic development has also recently been featured in The Atlantic (Why China's Migration Isn't Creating A Middle Class"), and the UW  News & Information website UW Today ("China's Urbanization Unlikely to Lead to Fast growth of Middle Class").