Shedding light on complexities of poverty 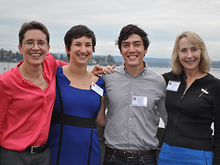 Professors Vicky Lawson and Sarah Elwood are featured today in a Seattle Times article that details some of their work and the complexities of relational poverty.

Much of the professors’ work focuses on the relationship between the middle class and poverty. Being middle class is about more than income or possessions, it’s a cultural status.

A collaboration with colleagues in Argentina found that middle-class identity is understood as part of what it means to be an American or an Argentine.

In both countries, Lawson said, “Middleclassness is clean, orderly, moral, hard working. It is the aspirational ideal for both societies, and the poor are the “other” to that — lazy, criminal, fear-inducing, disorderly.

We have a more sympathetic view of middle-class people who lose their homes in a crisis. That view is different from the way we see poorer people who can’t get housing because of the workings of the housing market.

Lawson and Elwood said the difference makes it nearly impossible for anybody to see the struggles of the middle class and the poor as related.