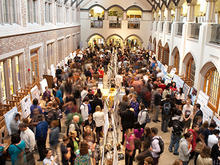 Four senior Geography majors have completed terrific Honors thesis projects this year: Julia Hanley, Anisa Jackson, Jeffrey Koss, and Matthew Wildey. They have all worked so hard this year to produce thought-provoking and important research. Please read their blog posts below to learn about the projects they have been working on. They will be presenting their research at the Geography Undergraduate Research Symposium on June 5, 2015, Session 2 in Smith 407 from 10:45am-12:00pm.

Boundaries are constantly shifting - the boundary between quantitative and qualitative study, between technology and the world, and between different nations. The United States can cover its conventionally political area or it can reach parts of Cuba such as Guantanamo Bay. Haiti’s nation can cover its entire country or it can cover parts of the United States, the Dominican Republic and other areas where they have gathered, otherwise known as the 10th Diaspora. This boundary shifting affects the ability of asylum seekers from other countries to seek refugee status. Recent news has brought up a crisis where many asylum seekers drowned in the Mediterranean Sea due to state policies.

My senior research project involves an extensive examination of Reddit and other online sources to understand how discourses about Haitian refugees and citizenship are impacted by technology and, thus, shift conceptions of nationhood and boundary-making. I argue three points: that the meaning of the word ‘refugee’ (and the treatment of refugees) has changed in the face of technology; that quantitative technology and qualitative arts can mix; and that the future will see certain boundaries fade whether directly realized by different countries or not. The project’s method is primary discourse analysis, though it encompassed qualitative interviews. This discourse analysis follows neogeography, in part, as it studies how people use online maps to communicate about Haiti, and I engage with migration and critical race theory to frame this work.

My discussion about refugees and boundaries begins at the international scale, including discourses at work within the United Nations and Reddit, as well as a couple other international NGOs. As technology increases its capabilities across the globe, the number of people using it also increases, lending to a wide variety of opinions previously undisclosed. Pictures, videos and articles are all analyzed. This section also discusses mapping software such as Ushahidi and OpenStreetMap, especially as it concerns the span of time before, during and after the Haitian earthquake in 2010. Geographers are now no longer the only ones creating maps, and the maps that the public makes can be studied in depth as another way of analyzing behavior and intentions.

The next scale I examine involves national politics, and a semantical discussion on the meaning of a nation, narrowing in on Haiti as a case study. Different national governmental organizations treat Haitian refugees in different ways based on their underlying principles, and sometimes these principles conflict with each other. The next level discusses state-level opinions and organizations in respect to Florida and Washington (state) in particular.

I would like to take the time to thank everyone who has extrinsically or intrinsically supported me throughout this venture. To request a copy of my thesis, please email hanleyjulia@gmail.com.

This research project considers the politics of cross-class relationships in the Seattle mixed-income neighborhood, NewHolly.  Formerly known as Holly Park, the neighborhood once compromised a public housing project.  In 1996, Holly Park was bulldozed and the mixed-income neighborhood known as NewHolly was built in its place through the controversial Housing Opportunities for People Everywhere program (HOPE VI).  Planning efforts for this type of development emphasize aesthetic adjustments to the urban landscape, the ‘dilution’ of poverty through the selective reduction of public housing residents and the introduction of middle class actors to the neighborhood.  HOPE VI strategizes cross-class relationships as a method for addressing urban poverty by promoting strategic relationships of middle class mentoring, social networking, and surplus resources and capital. My research draws on relational poverty knowledge to contemplate how the mixed-income neighborhood positions middle classness as natural, legitimate, and aspirational.

Amidst NewHolly’s discursive and material reinforcement of MC normativity, the neighborhood’s deliberate social mixing disrupts dominant spatial imaginaries of poor places by prompting the social interactions of a diverse range of neighborhood actors.  NewHolly’s residents must negotiate ‘zones of encounter’ (sites where individuals interact across difference) within unique and intimate confines.  Acknowledging the loaded allegory of NewHolly’s HOPE VI planning, my research aims to question how NewHolly residents currently relate to this sort of development, either by reproducing the socially engineered relationships presented by the neighborhood structure or by contesting them.

My research draws on evidence gathered through public policy literature, neighborhood literature (community websites and newspapers), participant observation at neighborhood meetings and events, as well as five semi-structured interviews with NewHolly residents and community leaders.  Some of the key discussions which anchor my research project utilize resident articulations of deviant behavior, crime, and property ownership to analyze how bodies that are deemed non-normative are included and excluded from such a development.  This research also frames the limitations and possibilities for transformative relationships of ally-ship by analyzing where residents first articulate the affective connections between themselves and residents who are different from them. I trace the possibilities for, and barriers to, how these relationships might move towards a transformative politics, where dominant narratives of poverty and middle class privilege are challenged and deconstructed.

To read more about this work, you can contact me for a copy of my thesis at jacksonanisam@gmail.com.

Every day, elementary to high school students make decisions that impact their ability to and likelihood that they will lead healthy lives. They can make the choice to exercise that will benefit their cardiovascular health now and establish a pattern that could extend well into the future. They make the choice to experiment with drugs and alcohol offered to them which could be detrimental to their overall health now and in the future. Considered individually and collectively, the decisions these students make are very important.

My research studies these decisions through analysis of the Washington State Healthy Youth Survey. The survey, which covers a wide range of health issues, is conducted every two years by the Washington State Department of Health and is given to most 6th, 8th, 10th, and 12th grade students in Washington State. Aspects of health covered by the survey include exposure to and perceptions of alcohol, tobacco, and other drug use and opportunities for and frequency of exercise. These aspects represent important behavioral lifestyle indicators that are associated with many of the leading preventable health outcomes in the United States, including cardiovascular disease and diabetes.   I chose to study eight grade student responses in particular, as students in eighth grade have made it through eight years of primary education and are preparing to transition into secondary education. The opportunities for students are greater and the implications larger on one’s future in secondary than in primary education. As such, this critical time period is an appropriate one for study of foundational health risk factors of students at different schools as they prepare for this transition.

I also wanted to understand how survey responses varied in time between 2004 and 2014, and I anticipated that most health indicator responses would have improved over time. I am still in the process of completing my analysis for this research question. The next step is conducting tests to see if there are significant differences for variables tested in both years.

To request a copy of the completed thesis, please email kossjeffrey@comcast.net.

This research began with an intense desire to learn and contribute to research that would have direct implications to the surrounding community and it is rooted in values of sustainability and social/economic justice. It also began as a critique of our current political economic systems in an attempt to find alternatives.

The U.S. economy is usually associated with free-market capitalism, which has been widely criticized for creating extreme inequalities in society and reinforcing an unsustainable global system. Capitalism’s grasp on the economy often seems so all-encompassing that alternatives to its economic model are met with scrutiny and skepticism. This research draws upon the work of J.K. Gibson-Graham to contribute to the realistic alternative of creating diverse economies through the Marxist and feminist lens of postcapitalism. This research contributes to dialogue surrounding diverse community economies, highlighting worker cooperatives as a sector of the economy that gives the highest level of empowerment to workers in a business. It is easier to deconstruct a hegemonic structure of capitalism when the different economic practices that exist outside of it are brought to light. In this way, this research aims to dislodge the hegemony of capitalism in the economy in search of a politics of possibility.

Specifically, this research focuses on the state of and capacity for development of the worker cooperative sector of a community economy in Seattle. The economy in Seattle is in a unique dualist state between rampant neoliberal economic politics and progressive, community focused politics. This research explores three worker cooperatives in Seattle as case studies to better understand Seattle’s community economy. These three cooperatives are each at different stages, one being in active business (Patty Pan Cooperative), one having been in business and is currently temporarily closed to the public (Black Coffee Co-op), and one in formation (CounterCulture Co-op).

I conducted a mixture of interviews and participant observation in order to be able to describe and analyze each individual co-op and how they conduct business in a way that moves beyond free-market transactions in a capitalist economy. Each co-op told a story. Separate, these co-ops may seem as single instances of worker-empowered businesses, but together, these co-ops represent a growing (worker) cooperative movement within Seattle’s community economy. I identify a few key themes that arose from my interactions with each co-op including the use of money and conceptualization of profit and the focus on building community and fostering support. I also identify specific challenges, but also capacities for growth that these co-ops and other worker cooperatives may experience in Seattle. This allows my research to move beyond a stagnant paper and allows me as an individual, as well as any other reader, to use this research as a jumping off ground for further involvement in the cooperative movement and to undermine capitalism.

To read a full copy of my thesis, please contact me at wildey.matt@gmail.com.