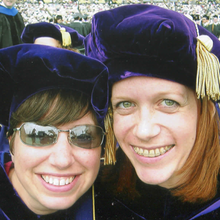 Upon first moving to Seattle before beginning her doctoral work at UW Geography, Meredith Reitman was surprised at the similarities between Seattle and her hometown of Ann Arbor, Michigan. Like Ann Arbor, Seattle was home to an outstanding public university and saw itself as a liberal, progressive city.  Both cities faced significant issues of racial discrimination that were largely unacknowledged. Soon after beginning her studies in 1997, a fellow geography graduate student shared Peggy McIntosh’s “Unpacking the Invisible Backpack” with Meredith, and she saw how she could channel her interest in race into her research. In her dissertation, “Race in the Workplace: Meritocracy, Whiteness and Belonging,” Meredith explored issues of race and belonging through the experiences of men in the high-tech workplace. She found that race matters at work, and whether or not one feels included, under intense scrutiny, or is able to blend in. The reason many minorities are underrepresented in the software industry is not due to their technical skills, as claimed by industry commentators; many are quite well-represented in technical jobs. But they are vastly underrepresented in managerial and sales positions more dramatically than in other industries.

Since graduating in 2004, Meredith’s career has taken a rather unorthodox path. She attained a tenure-track position at University of Wisconsin-Milwaukee. But three years later in 2007, she moved to New York City in order to work with the South Bronx-based community development organization WHEDco and the Center for Social Inclusion, which is dedicated to public policy research and grassroots advocacy in support of structural equity and inclusion.

In 2013, Meredith took on a new role in faculty assessment through a staff position at Hunter College in New York. As former faculty member, she is well suited to assist faculty in enhancing their students’ learning and their own teaching. She continues her work with the Center for Social Inclusion and is currently active in the Black Lives Matter movement. Meredith blends teaching, activism and community engagement with her dedication to anti-racist practice, equity and inclusion. In the Geography department, she assists faculty with understanding how their students learn – essentially teaching the teacher. She focuses on examining if students are having issues with forming an argument, or struggling to communicate or synthesize information.

Meredith has many wonderful memories of her time at UW and in Seattle. She met her husband here and they were married at the Seattle Asian Art Museum with fellow graduate students and members of her committee in attendance. She very much enjoyed working as a TA for many classes and as an RA for Vicky Lawson and Lucy Jarosz on their rural gentrification project. She was a founding member of the Geography Department’s ultimate Frisbee team called “Spatial Fixx”.  But one of her most fond memories is overdoing the pomp and circumstance of her graduation ceremony with fellow geography student and close friend Joanna Surgeoner (pictured top right).