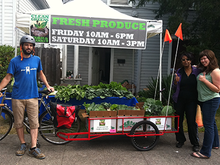 Magie Ramirez, UW doctoral candidate, was recently interviewed by KPFA's Against the Grain, a publicly funded radio show about "politics, society, and ideas."  It aired on Aug. 26, but you can listen to the interview by clicking this article. Magie writes:

Earlier this month I was contacted by a producer from the Berkeley radio station KPFA who came across the article I wrote last year based on my MA thesis. To my surprise they were interested in interviewing me, and today I had the honor of taking part in the show, Against The Grain! The broadcast will air tomorrow at 12pm PT on station 94.1 for those of you in the Bay Area that are interested in listening! The interview is on my engagements with Clean Greens, the food justice organization I worked with for several years in Seattle, the transformative power of black food geographies, and the need to think reflexively about privilege, race and power asymmetries when engaging in food justice activism. For those of you located elsewhere, you will also be able to hear it online if you are interested .