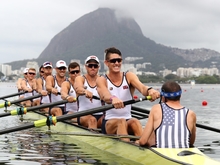 Congratulations to three recent UW Geography alums who competed in rowing events at the 2016 Rio Summer Olympics. Will Crothers (2010) and Conlin McCabe (2014) represented Team Canada in the men’s coxless four, and Sam Ojserkis (2012) represented Team USA as the coxswain in the men’s coxed eight division, a boat that also included three other Huskies. Both boats with UW Geographers made it to the finals and finished fourth in their respective events. Though rowing at the highest level is much different than sitting in a Geography classroom, Ojserkis cites several ways in which his Geography background has helped him along the way, including the honing of his directional skills while at UW, helping him to maneuver his shell through the busy urban waterways of Lake Washington and the Ballard Locks while dodging large industrial ships. Thinking about the relationship between his background in Geography and rowing career, Ojserkis said, “I take my geography degree with me every day I go out on the water. Not just for steering purposes; the critical thinking skills I picked up in Smith Hall help me solve everyday rowing problems.”

Congratulations, Will, Conlin, and Sam!