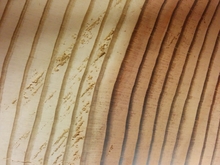 The landscape surrounding the Department of Geography was suddenly and drastically altered in early September, 2015 when the giant sequoia tree towering over Smith Hall was struck by a bolt of lightning. Much of the tree fell immediately, and the remainder was cleared shortly after, leaving just the stump behind.

The tree is believed to have been planted by Edmond Meany, one of the founders of the Department of History who is noted for planting trees all across campus. While the tree’s absence is a disappointment given its history and beauty, its legacy will live on for students in UW Geography who will study cross-sections of the tree in a lab for Geog 205: Our Global Environment.

Professor Christine Biermann is excited for the opportunities that studying the tree rings can provide for her students. “There's no better way to learn about tree rings and how they record climate data than by actually observing cross-sections of a tree” she says. “And when it's a tree that has grown literally in the backyard of the Geography department, that's even better”.

The tree’s age, estimated to be around 100 years old, adds another interesting factor for students to take advantage of. Professor Biermann sees its age, plus the environment that it grew in, as hugely influential in a lab setting. She explains that “it's fascinating to visually see the variation in tree ring widths from year to year and to compare the patterns in wide and narrow rings to climate in Seattle over time”.

While the old sequoia tree will surely be missed by students walking by Smith Hall, its use in the Geography department’s lab makes its loss a bit more bearable. As long as researchers like Professor Biermann and her students continue to find an educational use out of the tree, it will remain an important part of the history of the university.