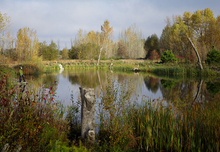 On February 24th, students from Professor Christine Biermann’s GEOG 370 class participated in ecological restoration work at Magnuson Park with Earth Corps, a Seattle area ecological restoration non-profit. Just a short drive north of campus, Magnuson Park has been at the forefront of Seattle’s wetland ecosystem. However, invasive species and human interference have made restoration work at the park necessary in order to preserve the ecosystem. The hours of work put in by the students has had a huge impact at improving the overall health of the park, as well as demonstrating the importance of restoration projections as a form of environmentalism.

Professor Biermann has stated that one of the key objectives of her class is to “comprehend and assess how different perspectives on environment and society impact environmental problem solving”. Taking this idea one step further, she raises the question, “are humans a part of nature or separate from it?”

Maria Paguada was one of the students who worked on the restoration event and brought up some interesting points in regards to how humans conduct these restoration events. “Why is it important to take out some weeds but not others?” she asked. “What part of selection goes into researching landscaping?” This line of thinking helps to shape some of the debate surrounding restoration work as a form of human impact environmentalism.

Part of this debate revolves around viewing nature as sort of an untouched, Eden-like entity that is constantly striving towards equilibrium. This old school type of conservationist thinking, where nature is a pristine myth, can run into issues with restoration work. For example, Magnuson Park has had the Himalayan blackberry bush take over large sections of the park. As an invasive species brought in by humans, the Himalayan blackberry bush has no place in Magnuson’s historic ecosystem. By working to remove it, the students were attempting to return the park towards an equilibrium that the bush had been disturbing.

At the same time however, a new line of conservationist thinking would say that ecosystems are constantly changing, and that setting benchmarks for what restoration work should attempt to return ecosystems dismisses this. Even though the Himalayan blackberry bush originally had no businesses in Magnuson Park, and despite the damage it had caused to native plants and animals, perhaps it was just which only adds to some of the debate surrounding it as a conservationist strategy.

Regardless of the two sides of the debate, the restoration work done by Professor Biermann’s students was an overall success all things considered. Even after initially questioning the importance of restoration work, Maria admitted that she felt “restoration meaningfully helps promote a diversity of species that helps improve our quality of life” As a cornerstone of the course as a whole, it showcases the importance of community involvement in restoration efforts. More importantly however, the students were able to be exposed to different types of approaches to environmental conservation, and the pros and cons that go along with the work that they do.