The Department of Geography has modified operations at least through May 31, 2020: To connect with the Main Office, please call 206.543.5843 or email geog@uw.edu. For Geography Advising, please visit this page to request an appointment via Zoom. Smith 415 Drop-In Lab, Sherman Lab & Group Study spaces are closed until further notice. 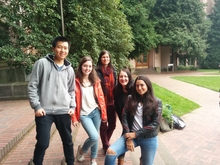 Five geographers were recently awarded the Mary Gates Research Scholarship, a competitive scholarship  intended to enhance the educational experiences of undergraduate students at the University of Washington while they are engaged in research guided by faculty. Kuang Sheng, Christina Chappell, Murphy Stack, Nina Mesihovic, Reyna Marquez will all be able to use the scholarship to pursue their geographic research.

Kuang's research, How Far Is It from Shanghai to Tokyo? provides an economic and cultural comparison between Shanghai and Tokyo as a global city. Following the global cities literature, he compares metrics of the key evaluation criteria based on the global cities hypothesis, in order to learn the disparities between the two major Asian cities under the ongoing globalization processes.

Christina’s research looks at recent patterns of shoplifting in the retail core of Seattle, examining the relationship between the loss prevention teams and law enforcement in the area. She is analyzing the geographies of 911 calls for shoplifting occurrences from 2010 to 2015, as well as conducting interviews with police and store managers. The interviews include mental maps of where shoplifting occurs most often, with the goal of assisting with preventing future shoplifting events.

Murphy’s thesis project focuses on the Northwest Detention Center in Tacoma, a prison facility that serves as one of the nation’s largest immigrant detention sites.  Her research is a site genealogy of the detention facility, in which she is tracing the history of immigrant detention from Seattle to Tacoma. More broadly, Murphy’s work investigates the immigration policies and practices of detention and deportation.

Reyna’s thesis investigates the Black Lives Matter protests in the Central District and their impact on politics, on racial identity, and gentrification. Using GIS, her project measures demographic and residential change in the neighborhood from 1990 to 2010. In addition, her research employs qualitative methods such as cognitive mapping and semi-structured interviews with local residents to provide deeper insight about gentrification in the Central District.

Nina’s thesis project, Immigration to Tahiti: Island Policies, Politics, and Problems, uses qualitative research methods to investigate the complex relationship between immigration and environmental issues, juxtaposing the postcard images of the island with the far different lived experiences of Tahitian residents. Her interest in this topic developed from her study abroad experience in Tahiti earlier in her academic career.

To learn more about the Mary Gates Scholarship and how to apply visit the rsearch's page here.