Dr. Monica Farias delivers "Relational Political Subjects and the Politics of Empathy in Popular Assemblies in Buenos Aires" at our May 19th Colloquium 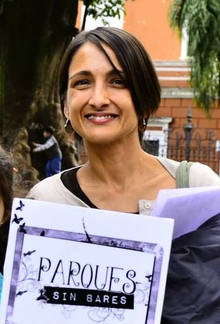 Abstract: In recent years, the literature on so-called geographies of encounter has paid attention to the effects of embodied differences coming together in urban space. This literature works to imagine policies that enhance conviviality in increasingly multicultural cities. At the same time, scholars have debated what needs to be done to effectively generate political change in the context of ongoing free-market capitalism and the advancement of ever more creative rounds of dispossession. Stirred up by the growth of so-called anti-capitalist and alter-globalization movements, scholars and activists debate the roles that social movements and grassroots organizations should - or can - have at this particular juncture and ask, how does political change happen? I engage and advance these discussions by drawing on ethnographic fieldwork conducted in two asambleas populares (popular assemblies) in the city of Buenos Aires. I look at the ways in which their members negotiate encounters with difference - in terms of class, gender, and race - over a sustained period of time. I pay attention to the effects of sustained border-crossing in the space of the asambleas in terms of their members' political subjectivities and the possibilities for building alliances across difference that challenge middle-class normative understandings of poverty and 'the poor.' In this talk, I argue that asambleas populares facilitate the emergence of relational political subjects aware of the structural causes of poverty and dispossession. These spaces foster a politics of empathy that inform paths forward for transformative social change.