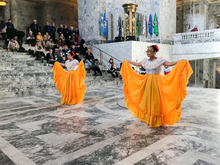 Sean Harding, double major in geography and communication, recently completed an internship as a legislative reporter in Olympia. Here are Sean’s reflections of his time there and how both of his majors helped him with his work:

“Last winter quarter, I participated in the Department of Communication’s Olympia Legislative Reporting Program. There, I spent about ten weeks as an Olympia Bureau Reporter for the Washington Newspaper Publishers Association reporting on proceedings taking place inside and around the Legislature. The articles I wrote for WNPA were sent to about 100 local newspapers across the state and published both in print and online.

I was feeling a little hungry, so to speak, so I added a three-credit geography internship credit to the program by working with Dr. Larry Knopp to analyze, from a spatial perspective, how contestations over values and meanings manifest in political and ideological cleavages in the Legislature. The internship was a direct continuation of the discussion of cultural politics and political culture I explored in GEOG 301: Cultural Geography.

The whole experience was a wild ride. Every day there was another story to tell. In some cases, people would dress in their Sunday best and spent hours in a car driving across the state to speak for a mere 60 seconds at hearing on proposed changes to gun laws that drew thousands. Obviously, not everyone could speak, but the faith I saw in our democratic processes across the political spectrum was inspiring and beautiful.

Amusingly, I attended a fired up and sensational hearing on a Senate Joint Memorial that 'prayed' for Congress to curb the President’s ability to launch a nuke – where lawmakers pointed out that the Puget Sound area would be a prime target for an attack in the event of nuclear war.

I spent hours studying wrongful death statutes in Washington state so I could better understand a bill that lawmakers drafted in response to the 2015 Ride the Ducks accident on the Aurora bridge in Seattle that killed five international students. The testimony I heard in that hearing were among some the most shocking and real words I have heard in my life.

But there were lighter moments, too. The Washington State Potato Commission handed out free baked potatoes on Olympia Potato Day. Kaiser Permanente handed out free apples and first aid kits as part of a massive public relations and lobbying campaign. 'Starship Enterprises' wowed lawmakers with wheeled delivery drones: suddenly, ordering fast food would become easier if they passed their bill.

I even had the pleasure of attending a happy hour with the Supreme Court Justices at the Temple of Justice and had dinner at the Governor’s Mansion as part of Legislative Day, and met many of the editors from across the state who have been publishing our stories – an unforgettable night for sure.

I also had the opportunity to put some of my GIS skills to use. I do not consider myself proficient at creating maps, but I used what I learned from Dr. Suzanne Withers’s geodemographics course (GEOG 245) to pull data from the Census Bureau and create a basic map to visualize who the people of the 19th Legislative District really were, and see if it lined up with who their representatives thought they were. Both my editor and UWComm were stoked to have one of their reporters create a map (it does not normally happen in the program), and the Aberdeen Daily World printed the map on the cover of their weekend edition as part of their lead story – it felt really good to see my geographic skills put to use in that way.

My studies in communication and geography have complemented each other in many ways I did not expect. Both fields aim to seek truth and report it. I am excited to see how my knowledge in both propel each other going forward.”

Click here for an example of Sean’s work that appeared in The Daily Chronicle.