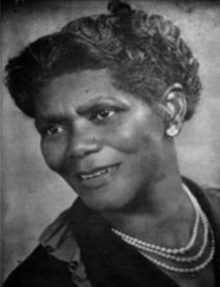 Portrait of Laudelina Campos de Melo, the founder of the first domestic workers association in Brazil in 1936

The Department of Geography is delighted to announce that Ph.D. Candidate Caitlin Alcorn has been awarded the Susan Hanson Dissertation Proposal Award from the American Association of Geographers' (AAG) Geographic Perspectives on Women (GPOW) specialty group! The award "honors Susan Hanson, a past President of the AAG, whose scholarship has been key to extending understandings of the intersections of gender and geography. It seeks to highlight a Ph.D. dissertation proposal that promises to make substantial contributions to the geographic analysis and interpretation of topics related to gender, sexuality, and feminism." Here, Alcorn explains the research project and lessons learned while applying for the award.

Describing the dissertation: "I study paid domestic work in São Paulo, Brazil. Paid domestic work (jobs like nannies, housecleaners, maids) is a huge sector of female employment in Brazil and in the last few years it has undergone some major changes, most important among them being the rise of part-time day work arrangements as opposed to the full-time and even live-in arrangements of the past. I’m interested in understanding the significance of this shift in employment arrangements, particularly for domestic workers and employers, but also for Brazilian society more broadly. Paid domestic work has a complicated history is Brazil and is tied up in colonial legacies of racialized servitude, as well as gender and class hierarchies so changes within the sector have potentially far reaching implications."

How this project has developed over time: "As an undergraduate studying food and resource economics, I had the chance to participate in an exchange program in Curitiba, Brazil. It was through that program that I started learning Portuguese and really the first time I had traveled outside of the U.S., so it was a huge learning experience. At the time, I had never taken any kind of critical theory class and was interested in feminism and labor issues on a pretty surface level. When I was in Brazil I started noticing how common it was for people to employ maids in their homes and that all the maids I saw were women, predominantly women of color. When I started my M.A. program [at Clark University], I knew I wanted to focus my research on something around feminism and gendered divisions of labor, so I started reading about care work and reproductive labor more broadly. At first I thought ... the social expectations to be responsible to care for children and clean the home (all this work that is so devalued and largely unpaid) was something that all women experienced relatively equally. Then I read Evelyn Nakano Glenn’s (2010) Forced to Care: Coercion and Caregiving in America and Judith Rollins’ (1985) Between Women: Domestics and their Employers, and quickly learned how wrong I was. They both basically explained how historically white women had benefited from the labor of women of color, freeing themselves from this responsibility over reproductive labor by hiring low-paid nannies and house cleaners to do the work instead. As a white woman, [I found] the notion that white and middle-class women were liberating themselves from this work on the backs of working class women of color was a uniquely disturbing injustice to grapple with, on top of the shame and embarrassment for being so slow to recognize it. Then in the middle of my first year in my M.A. program [in 2013], a constitutional amendment was passed in Brazil that extended labor rights to domestic workers. It seemed like an ideal entry point into studying all of these areas I was interested in, so I focused on the amendment for my M.A. research... what it aimed to do, and what consequences might result from its passage for workers and employers. I wasn’t able to actually travel to Brazil to interview people, so it was all based on textual analysis of the legislation, congressional debates about the legislation, and the few media sources that had written about it at the time."

On the significance of the dissertation research: "[B]ecause the 2013 legislation applies only to domestic workers who work more than two days per week in the same house, [d]ay workers are considered self-employed independent contractors, and are thus not covered by most labor protections. Many of the workers I interviewed discussed this trend of employers replacing full-time workers with day workers, and pointed to their own experiences or those of other workers they know who were fired and replaced by part-time workers or had their hours cut down to two days.

Day work arrangements present both opportunities and challenges for workers. Day workers often earn higher wages and can potentially establish more formal, less familial-like relations with employers. However, in addition to being excluded from most labor protections, day workers also have to navigate the demands and schedules of multiple employers, commute all around the city, and frequently search for new employers to fill their schedule. So I’m interested in better understanding what that experience has been like for workers and how they navigate this shifting landscape.

Something I’m interested in too are the wider impacts of this shift to day work arrangements within the paid domestic service sector. The sector has been a fundamental institution within Brazil since the colonial era and predominantly white, middle and upper class families largely became accustomed to having a full-time domestic worker at their disposal. This meant that middle and upper class women could enter the workforce without men being forced to take on additional responsibility for domestic chores. The state, too, was able to neglect some of its responsibilities like providing full-time public schooling and day care, as families could cheaply hire a nanny to fill this need. As families slowly decrease their dependency on paid domestic workers, there is potential for broader social changes like a renegotiation of the traditional gendered divisions of household labor and a swelling of public demand for improved social services. So I’m curious to see how much this is happening and what the other unanticipated effects changes within the domestic service sector might bring."

Advice for submitting grant and award applications: "A few key points of guidance I received [from advisor Kim England and Professor Mark Ellis in the grant writing course GEOG 513] were: One, make your contribution to the discipline clear. It’s important to situate the research project within existing literature, but you don’t want to spend the whole proposal talking about everyone else’s great work. You have to make clear how the project builds on this existing literature and takes it in new directions. Second, be clear and specific about your research methods and how they will help you answer the research questions you have laid out."