With New Course About Genealogical Geographies, Faculty and Students Find "Joy" in Collaboration 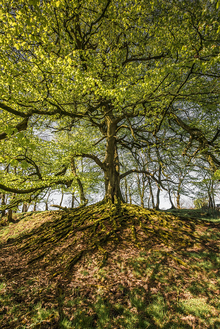 "Roots (Spring)" by Alistair-Hamilton is licensed under CC BY 2.0

While all students majoring in geography are introduced to the basics of social science research design in GEOG 315 Explanation & Understanding in Geography, a small group had the opportunity to apply these concepts while researching their ancestry in a brand-new course. Now called "Genealogical Geographies," GEOG 455 brings together historical geography with spatial genealogy as the brainchild of a partnership between Professors Suzanne Withers and Michael Brown. Brown explains that his  interest in genealogy was greatly influenced by Professor Emeritus Dick Morrill's work on his own ancestry about three years ago: "During his retirement, Dick has become a master genealogist and I was inspired to try it myself. I showed Suzanne my own developing family tree and she instantly said, 'This would be an interesting basis for a course.' And I agreed." Together, they spent about a year hashing out the themes, logistics, and learning objectives before launching to students this past spring. Withers notes that her course, GEOG 245 Geodemographics, provides a deep understanding of how we come to be who we are and where we are as a nation, beginning with students' individual migration histories, which are "so varied, fascinating, and inspiring." Her experience with geospatial analytical techniques helps students develop "complex geographic visual representations of their personal narrative" in ESRI StoryMaps.

Brown approaches the material by "really try[ing] to get students in the class (and myself) to explore how 'typical' or 'extraordinary' events and people in their [family] trees were for a given era and place. In order to do that, you have to discover (and document) what your ancestors did (or did not do), but also  learn about the broader contexts in which they lived." Both Withers and Brown were gratified to find that students worked hard, and delved deep, into their families' histories. Withers even states, "[t]hroughout the course we shared astonishment, intrigue, frustration, laughter, and tears." Senior geography major Adriel Castro's project allowed him to work closely with his mother, who has conducted extensive research on their family's history - even contributing to an upcoming PBS documentary. Castro traced his great-great-grandfather back to the Porvenir Massacre in Presidio County, Texas, in 1918. Calling this course "an amazing experience," Castro writes that "[i]t was a lot harder than I thought it would be to get information because of all the technology we have. A lot of factors come into play when researching my family ancestry." Some challenges Castro faced included "first or last names might have been misspelled due to [translation from] Spanish to English, the birth years were wrong and maiden names played a factor in finding the right person. Also, my great grandparents were migrant workers. They followed the work and didn’t stay long in one place, basically until settling in Washington. Due to them being migrant workers, it was hard to find anything about them. Most likely they got paid under the table and they lived a very simple life. I did find a lot of interesting things about my family. I don't know if it’s a generation thing or not, but both sides [of the great grandparents' families] didn’t discuss their past and kept to themselves. My grandparents didn’t know much about their parents. I thought that was very weird because that’s the total opposite of how my family is now. I can ask my family anything and I love it. I can say I have an amazing family and have their full support. I know all my grandparents suffered from being poor growing up and they all have worked very hard for their families to have everything they want."

Rising senior James Alexander also relied on historical documents and materials collected by family members over generations. Growing up, Alexander had always understood he had an ancestral connection to Archer Alexander, who is represented together with President Abraham Lincoln in the Emancipation Monument in Washington, D.C. This was an oral history shared throughout his family tree." Now, after completing the class project, Alexander says he is "unwilling to make direct lineage claims based on the evidence I have uncovered so far. It seems the more I uncover the less clear the link is. I believe important information is missing in the period between 1870 and 1900. Most of my research has been focused on identifying stronger links during this time period. I wish I could 100% claim a relation but until more research is conducted then I can only claim he is likely my ancestor." Despite this lack of certainty about the familial connection, Alexander is clear about the lessons he has learned from engaging in this work: "Making the effort to attempt to understand your ancestors should start with your grandparents, if you can. Genetically they are 25% of you, so knowing them or telling their story leads to the story of you; Time, Place and Scale are incredibly important; [and] artifacts come in all shapes, sizes and substance! I had photos of my grandparents, birth certificates, burial records, and a book written by William Greenleaf Eliot Jr. called The Story of Archer Alexander: From Slavery to Freedom." Significantly, Alexander points to the importance of the census in this research, particularly for pinpointing where and when key figures appear, but also indicates that there are "inherent inequalities [in] both the census and city directories." Together with the "amount of inequality perpetuated by mapping and the source of maps," these themes were made clear through class discussion that Alexander says helped to "facilitate learning" while StoryMaps allowed he and other students to "define the medium."

Considering the benefits of co-teaching this class, Brown exclaims, "I get to learn from my brilliant colleague! The synergy is invigorating and it's also nice to not have to constantly be in charge of every aspect of a running course." Withers says this co-teaching experience was "wonderful," considering the complementary expertise shared by herself and Brown: "Michael is *really* present - it was a joy to collaborate with him on developing this class... In addition, it was a privilege to lead the students through the process of discovering their genealogical identity. The journey was deeply personal, and deeply reflective. It is a raw journey - one to be traveled together, gently."