You Thought You Were an Environmentalist: Geography Students Broadcast Environmental Justice Themes through Podcasting 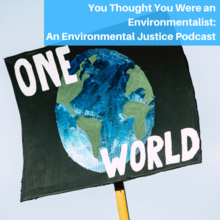 "How does climate change disproportionately affect the health of women of color?" So asks episode 7 of the new podcast series, You Thought You Were an Environmentalist: An Environmental Justice Podcast. Produced by students in the autumn 2019 writing link with GEOG 272 Geographies of Environmental Justice, the podcast's episodes are the culmination of a full quarter of research, writing, editing and recording by nine groups of undergraduate students. Each episode covers a different topic, selected by the students, that is "extremely pressing at our current moment," says Geography Ph.D. Candidate and Interdisciplinary Writing Program course instructor, Julian Barr. Rather than requiring students to write an academic research paper, Julian assigned the podcast because of "the intended audience, which in this case is a public audience. If you ask students to write research papers, they are writing it for the instructor and that’s not bad but in reality, most students need to improve writing for others that are not experts ... Podcasting can also be a lot of fun and allows students to get creative while also gaining a lot of skills around research, writing, and podcasting production." With the scripted podcast, the goal was to make each episode "thoughtful and informational," as well as "accessible, so folks that need to read the podcast, instead of listen, can." For his part, Julian learned about podcast production from Elliott Stevens and Perry Yee at UW Libraries and had access to "essential resources" through the Sound Studio and Media Arcade. Professor Megan Ybarra, who developed the Geographies of Environmental Justice course and teaches it each year, is "grateful that students were able to use the podcast medium to delve deeper into the specific issues that they were passionate about that I only had a chance to cover in broad strokes in the lecture format."

In approaching the topic of their episode, "Climate Change and Women of Color," Mina Hassani, Moe’Neyah Holland and Gaby Rose were "interested in the relationship between people of color and environmental justice, especially how their health would be affected by growing environmental concern," according to Mina. Gaby notes that the three students did not know each other beforehand, but were asked to work together because they had all identified this shared interest; as a result, "delegation of work for the podcast was pretty simple since we split it into three equal sections and each worked on one of those." As they delved into their research, Mina initially found it difficult to have such a "specific" topic, eventually realizing "we would have to get creative with what sorts of sources we could include. But that just made it even more valuable when we did find something new and interesting! It motivated us to expand our scope and approach the topic from different angles."

For example, Gaby highlights the significance of the "story of Shalon Irving, a young Black woman who lost her life after childbirth due to the failures of the medical system in serving Black women and women of color." While "the stories of marginalized folks are often buried by big statistics and broad brush strokes, which often numb people and erase the experiences and hardships of individuals, [b]eing able to highlight her story was super important in bringing attention to the severity of the topic we focused on." By researching this topic and foregrounding individual stories, Mina came to realize "that intersectionality is really at the heart of so many issues. Looking at the sources, any issue would be hard to attribute to just women or just people of color. Women of color’s experience is the way it is because of every part of their identity coming together. Racism and misogyny in the United States propel so many struggles that these women are facing, and just looking for one reason as the explanation isn’t enough." As an African-American and Hispanic woman, Moe’Neyah says this project "made me very cautious about going to the doctor from now on... I had to readjust my thinking that in the American healthcare system, maybe I wouldn't be treated the same as a white woman."

Now, says Gaby, "I am much more cognizant of the impact my work and research has in terms of whose voices are being represented, who will benefit from it, and who has access to the same tools that I do. It has also made me much more interested in access to education as well as research around environmental justice, health, and climate change...." Similarly, Mina finds "being asked to consider the limitations of your sources and who they’re coming from is something I found important. I had never considered that, but of course it makes sense to assess how a study might be affected depending on the perspective of who is designing or writing on it." In addition, Mina now finds it easier "to recognize [intersectionality] in other coursework and everyday life." This writing link course, together with GEOG 272, had a "lot of impact" on Moe’Neyah, who says studying geography became "that much cooler" through analyzing things according to place, and recommends that "everyone should take a geography class." By the end of the quarter, Julian noticed that when students had an opportunity to reflect on the course, "they felt really proud of what they were able to do in 10 weeks and that they had a tangible artifact from this course... I think this reaffirms that when teaching it’s good to push ourselves against the traditional research paper genre. It does work in a lot of ways but there are so many other mediums we can get students to engage with that include research and writing but also bring forward other skills and creativity."

Mina certainly agrees: "The link class was really valuable to me because it gave me the opportunity to ... get involved with the material, and made it feel much more relevant. I am also grateful for the fact that this class allowed me to produce something interesting and creative while also working on my research and writing skills." Gaby, too, writes that the writing link class "definitely helped me explore and understand the topics we were discussing and learning in [GEOG 272] to a much deeper extent than I think I could have without it." Moe’Neyah advises listeners to "be open minded about the podcast" and "acknowledge privileges that you have over others in the healthcare system." Professor Ybarra notes that this episode's close attention to intersections of race and gender on how women of color experience climate change "is particularly crucial in our current conjuncture, as women of color are on the front lines of global pandemics as both disproportionately vulnerable to COVID-19 and disproportionately called in to care for communities of color in times of crisis." For further reading on this subject, Professor Ybarra recommends Leah Lakshmi Piepzna-Samarasinha’s Care Work: Dreaming Disability Justice.

Find the full podcast, beginning with an introduction from Julian, online or wherever you listen to podcasts. If you would like to learn how to make a podcast drawing on geographic research, consider taking GEOG 301 Cultural Geography in Summer 2020.